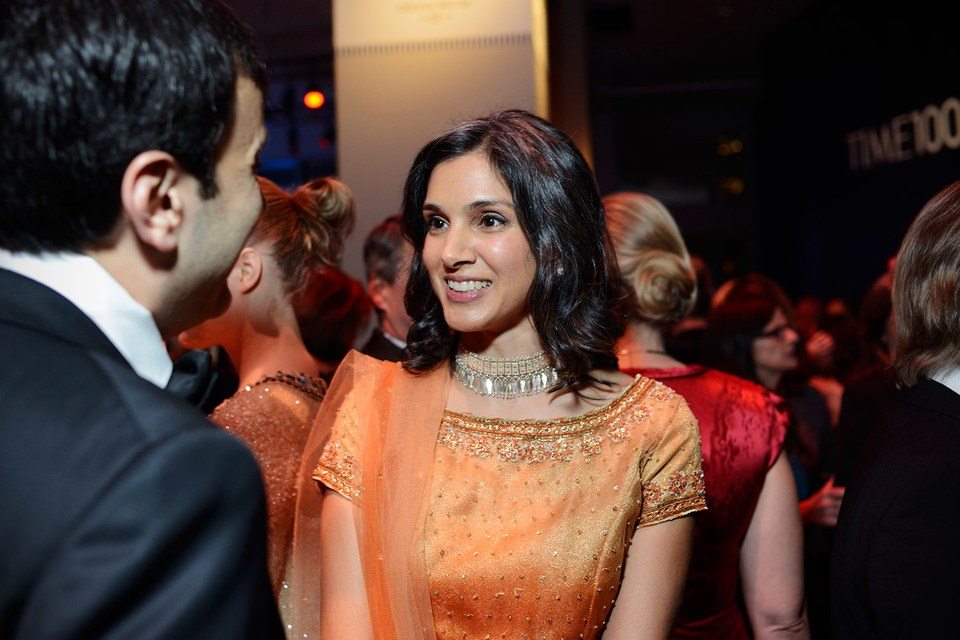 On Monday afternoon, shortly after The New York Times broke the news of her appointment as the next editor-in-chief of Vanity Fair, Radhika Jones visited the editorial and sales staff of V.F. at its headquarters on the 41st floor of One World Trade Center. Jones was accompanied by Condé Nast C.E.O. Robert A. Sauerberg; Vogue editor-in-chief and Condé Nast artistic director Anna Wintour; and, of course, the man Jones succeeds, Graydon Carter,the legendary editor who has run V.F. since 1992 and announced in September that he would be stepping down at the end of the year. “I truly feel honored to be entrusted with this role,” Jones, who is 44, said to the assembled staff members, beside a wall emblazoned with the mantra “Think Like a Start-Up.”

Jones, a former high-ranking editor at Time and The Paris Review, spent the past year as the editorial director of the books department at The New York Times. She will begin her V.F. tenure on December 11. Shortly after addressing the troops, she sat down to talk with me.

Vanity Fair: You met Graydon for the first time this morning. Did he give you any good advice?

Jones: He said I’m gonna be very busy for at least a year or two, probably longer. It’s fun to meet a legend on a Monday.

Your name first surfaced in press reports a couple of weeks ago. When did your conversations with Condé Nast begin?

And at what point did it become clear to you that you wanted this job?

It was appealing to me at first mention. Vanity Fair holds this very unique place in the culture. There’s no title that compares. I’ve worked at a number of different places, and the more I thought about it, the more I thought that I could draw on different parts of my experience in a way that would be meaningful. But I always thought I was a long shot, so maybe that took a bit of the pressure off.

I heard that you submitted an ambitious memo. Can you walk me through the broad contours of your pitch to Condé Nast?

I think I should probably wait and just let it show.

On paper, your background is very literary, academic even. What are your interests in Hollywood and society, some of Vanity Fair’s strongest suits?

I’m fascinated by celebrity culture. When I started at Time in 2008, I was the arts editor, and it felt like this moment where entertainment and celebrity were really starting to change. Reality TV was gaining momentum, and the ways that people watched TV and watched movies and read about them and participated in the voyeurism of celebrity life, all of those things seemed to be changing. It’s the kind of thing you can look back on, years later, and think, wow, something fundamental shifted in the culture. I also happen to have read Tina Brown’s Vanity Fair Diaries this summer, and found it interesting to think about how she positioned high and low culture, because they’re so much more mixed now, and it’s an interesting proposition for a magazine like Vanity Fair to sort that out. It feels right to me to be thinking about these things at this moment. It feels like our culture is calling for it.

All magazine brands are facing intense pressures as they grapple with the shift away from being print-driven platforms. In terms of Vanity Fair’s platforms, where do you see the most exciting opportunity?

I think it has opportunity on every platform, but I think of significant interest to me, coming out of the gate, are the Web site and the events. They’re both areas where Vanity Fair is already strong and it would be incredible to build on that.

Having overseen the Time 100, which is a hugely influential events franchise, what are your ambitions for Vanity Fair’s events business in particular?

There are a lot of possibilities, but it’s important to sit down and talk to everyone who’s involved and figure out what the priorities should be.

What are you favorite parts of Vanity Fair? What are stories or sections or areas of coverage that have most dazzled you?

I’ll say a nerdy one first: the Star Wars portfolios. I love photography in general, and I love spectacular portrait photography and photojournalism, and I think that’s such a great strength of this magazine. Basically, what I’m saying is, everything. But I also love really deeply reported long-form narrative. And profiles. I’m a big believer in the ability to tell stories through people, and so for me, the profile is a way not just to get to know someone who’s important, but to figure out something about the way we live now and what we care about.

You were at the Times just short of a year. What did you learn there?

It was an amazing year to be at the Times, and it did feel like a transformative year. I learned a lot about talent, and also about engaging with the reader and how important that is. I think we all know this, but what was really emphasized for me, in my year at the Times, was how a great publication can create a community around its content.

I’m sure they were fighting to keep you.

The Times is a hard place to leave. I will say that, for me, it was a wonderfully welcoming place, and I will miss it a lot. In the end, I felt that this opportunity was unique.

I follow National Geographic so I can see all the animals, and also travel sites. I love travel magazines and food magazines, and I read New York and The New Yorker and other things with the words “New York” in them. I’m on Twitter, so I read the things that come to me from any number of places. Because I’ve been immersed in books in the past year, my reading has skewed toward books and book trades. I’m obsessed with The Americans, and I can’t wait for the new season of The Crown. I aspire to watch more television. There’s so much right now that you have to really make a commitment. I need to re-commit.

What would be your biggest gets for Vanity Fair? Who do you want to see on the cover?

I’m gonna make a private list and put it in a drawer and in a year, we can take it out and look at it.

As someone who’s relatively unknown compared to some of the other candidates who were being considered for this position, like Janice Min or Andrew Ross Sorkin, what’s one thing you’d want people to know about you?

That I’m an omnivore, culturally speaking, and story-wise too. I’m always ready to be interested in something. That’s my default position.